How To Build Your Acting Business Without A Day Job 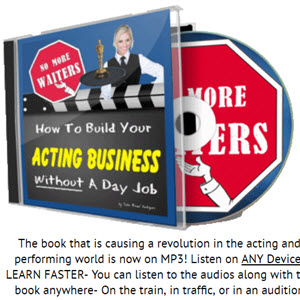 The different types of auditions that you might encounter will be determined by where you are in your present career as an actor. Well-known actors usually don't audition for parts; everyone knows their work already. However, if a famous actor is hot to play a part that he is not being considered for, he will often send a professional videotape of himself playing the character. If you are just starting out and have no professional film experience, this course of action is usually a waste of time. You have to accept where you are in the business and try and take the next logical step to advance your career. I once had a friend who was very upset when Madonna got the part of Evita, because she felt that she looked so much more like Eva Peron than Madonna did, therefore, she felt she would be K able to play the part so much better. It was true that her resemblance to the ~ real Eva Peron was uncanny, but she had never made a movie and had only just begun to take acting lessons! For her to even engage in such thoughts ^

was a waste of time and energy. There are some parts that are out of your reach; they are going to be played by a star, and that's that.

Some directors will go for the more relaxed European approach to auditioning and start with informal interviews. There's nothing to do but be the best of yourself, with a slight leaning to the parts of your personality that are exhibited in the part. It's very important to be positive and professional in this situation. Filmmaking requires many hours of enforced companionship with the others on the set, so everyone must get along and keep the work atmosphere positive.

If you are a member of the Screen Actors Guild (SAG), you are allowed to interview once without being paid. Theoretically, if they want to start to work with you more—have you audition with memorized text or do scenes with other actors being considered for the cast—they are supposed to pay you for your time. If you are not a member of SAG—and if you are just starting out, you won't be—then, you aren't protected by the union, and you may encounter many different scenarios that are used as a selection process for actors. In fact, because the Screen Actors Guild has expanded its contracts to include many different levels of low-budget films, including student films, even if you are a SAG member, you will encounter different variations on the audition theme if you go up for these lower-budget projects.

I would suggest you use your instincts in these situations. Always check what part of town you are going to and whether it is a private residence or an office. Never do anything that you don't want to do; if you don't want to do what they are asking you to do in an audition, you are not going to want to work with these people anyway. Know your own nature, and stick by your boundaries. Sometimes, with the lower-budget films, the people running the auditions have little experience in the field; they may be just starting out themselves, and they will make mistakes. You must use your judgment in these circumstances—are they just inexperienced but with good intentions, are they totally inept, or are they savvy and trying to take advantage of you? Usually, the audition will be the telltale heart of the way the rest of the project will be run. w You should be proud of being an actor. You should have integrity, and & the heritage of actors, both on and off the screen, should give you strength ™ and confidence, two qualities you'll need to land a job. Screen Actors < Guild is one of the strongest labor unions in the world, with a great history „ all its own.

WHAT IS THE SCREEN ACTORS GUILD?

The Screen Actors Guild is a labor union for actors in motion pictures in the United States of America. Its jurisdiction encompasses most films that you see, most of the prime-time dramatic television programs, and most of the television commercials. Through collective bargaining with producers of these films and programs, SAG governs how actors are hired, how they are treated while they are working, and how much they are paid for their services.

All actors working under SAG contracts receive the same minimum payment and the same regulated treatment (overtime, meals, transportation, etc.) without any negotiation. The Guild has already negotiated the terms of the contract for them. Of course, depending on who you are in the profession and your clout, you can always negotiate for better than the minimum terms. Usually, an agent or a lawyer will handle these negotiations. Most actors are working for the minimum, which isn't a bad day's work, when you can get it.

We all hear a lot about how much money movie stars make and how wealthy and glamorous they are; we fuel our dreams with visions of fame and wealth. However, it is important to note that most of the membership of the Screen Actors Guild makes less than $7,500 a year and that at any given time, 80 percent of the membership is unemployed. An actor, therefore, must be very resourceful if he wants to make a living; usually, actors have several sources of income in order to make ends meet between jobs. There's a German phrase, Lebenskunstler. Literally translated, it means "an artist of life," and certainly every actor I know is a brilliant Lebenskunstler. They have to be able to survive, and they're usually happy and proud of their chosen profession. They have a joy in living that exudes from every pore; it is this quality that sets them apart from the pack and makes them attractive to watch.

When you join the Guild, the following statement is included with your orientation materials: "I understand that obtaining employment in the motion picture industry is my own responsibility and that it is not the function of the Screen Actors Guild to secure employment for its members."

What the Guild does do is enforces its contracts and arbitrates on behalf of any actor who feels that his contract has been violated. The Guild is very powerful because of its strength in numbers, but also because the stars and K the very successful actors are diligent union members. They stick by the -2 union, so the unknown and beginning actor has protection as well, sheltered ^ by the wings of the famous. Some very famous actors have been president ^ of the Screen Actors Guild over the years: James Cagney (1942-44), g

SAG has a great history of actors uniting for better working conditions. The Guild was started in 1933 by a small group of very brave actors who decided they could band together against the extremely powerful studios and fight for better working conditions. Back in the thirties, an actor might earn six or eight dollars a day, fifteen dollars for a week. There were no limits on working hours and no safety regulations, so an actor's day might start at 4:30 am and end at midnight, with no breaks for meals and no place to rest between shots. Actors did what they were told for fear of never working again; there was always another actor eager to take your place.

If you would like to learn more about SAG, its history, what it does, how it operates, and how you become a member, I would suggest you visit SAG's Web page at www.sag.com. It's extremely informative.

How to start an acting career and be succesful